The SGA held its second legislative forum on Jan. 9. The event brought five local legislators to Anna Irvin Dining Hall to answer questions posed by the SGA and student body.

On Feb. 27, students from public universities across the state will gather in Montgomery to persuade state senators to vote in favor of laws affecting college students.

Norman served as emcee for the event. He first posed the SGA’s pre-written questions.

The first question asked what the current funding plans for higher education are. These funds affect everything from state tuition rates to student loans.

Hill answered first, saying that students could expect about $250 million or more in the higher education budget. According to McClendon, the struggle legislators face deals with how the funds are allocated between K-12 schools and higher education.

Because public grade schools are guaranteed a certain amount of a budget, Hill informed that there is normally a two-thirds split in favor of grade school education. McClendon called the situation “a struggle and an argument.”

Norman then asked the panel their opinions on the university’s new physical expansions to increase its relationship with the town of Montevallo.

Weaver expressed enthusiasm about the developments. Ward recalled a time when the university and town were at odds with each other. He referred to the renewed relationship as a “win/win” situation.

The SGA’s third question was directed to Cam Ward, the chair of the senate committee on natural resources and energy. Norman asked Ward if higher education could expect any funds from the BP lawsuit settlement.

While Ward commented that it was possible, he explained that the money’s division across several state funds was still to be decided.

Hill warned that the state may not see the money for a few years. He mentioned talking to representatives from Alaska about the Exxon-Valdez oil spill settlement at a recent conference. According to Hill, in the 27 years since the lawsuit, Alaska hasn’t seen any money and won’t until maybe next year.

The legislators were asked if the state could expect lower taxes. The majority confirmed that no new taxes would be implemented, but McClendon explained that money is always short.

He said taxes for small business would most likely go down, but income and property tax will remain where they are.

While Boeing’s plans to build a factory in Alabama fell through, Norman asked if any other large corporations were looking to build in the state.

According to Ward, there are big name manufacturers from Detroit that are eyeing Alabama but keeping their research and development factories in Michigan. He said an educated work force is the key to change the minds of the factory owners.

Hill agreed, saying that he knows of five major companies looking to build in Alabama but he had to keep their identities a secret.

Norman then asked the politicians to explain why college students should stay in Alabama to work after graduation.

Hill began by explaining that there is a “great life” to live in Alabama. He cited the low cost of living and his community’s safe atmosphere as prime reasons. Ward also cited low living cost and added that the state had a lot to offer designers, health professionals and engineers.

The last question posed by the SGA asked for the politicians’ opinions on the importance of Higher Ed Day. The legislators were asked why they thought the day was important and how students can express its importance on Feb. 27.

McClendon stated that students should come to Montgomery to act as their own advocates and lobbyists. He stressed that legislators are outnumbered five to one by lobbyists and invited students to his office to discuss their wants and needs for higher ed funding.

Weaver agreed with McClendon’s advocate claim and encouraged students to wear Montevallo memorabilia to show the legislators where they are from to gain support.

She later explained that having advocate experience as a student would only further help later career causes.

According to Askelson, the state superintendent and state department of education almost succeeded in regulating private tutoring and church school education. She asked the legislators about their feelings on educational choice and if they will act to stop any future abridgements of it.

McClendon stated that he believes parents had the absolute right in how to educate their children, not the government. Wallace answered that the same feelings would be offered throughout the whole panel, which held true.

President Stewart thanked the legislative panel for their support to the university and asked if their colleagues in the other districts understood the importance of higher ed.

McClendon said that the recent changing nature of the state legislature allows for a greater appreciation. Wallace said that his own experience attaining both a bachelor’s and master’s degree helped to further inform him on higher ed’s importance.

Junior Chris Holder asked the last question of the forum. Holder asked how the representatives that served on healthcare and insurance committees have helped or hindered the implementation of the Affordable Care Act AKA “Obama Care.”

McClendon began by dubbing it “one of the most unpopular bills to occur in the state of Alabama.” He explained that the expansion of Medicaid would add 350,000 (totaling 13,000 on welfare according to McClendon’s numbers) eligible people to Medicaid and that the state is having a difficult enough time paying for Medicaid as is.

Ward explained that grade school teachers are upset because their insurance premiums have gone up 30 percent since the ACA’s passing. To cover that increase, he warned that the money will be charged to the state budget. In an effort to keep a balanced state budget, the money could be removed from the education budget.

With all audience questions answered, Norman asked for thanks and a round of applause. He then invited Gordon Stone, the Executive Director of Higher Ed Day to speak on the cause. He asked the students to participate in the cause and for the legislators to consider what had been discussed once back in their offices.

As the small crowd dispersed quietly out of the large hall, the SGA members who brought the event together and panel of legislators posed for photo opportunities. SGA President Rachael Swokowski commended Bradley on the well organized event and said she learned a lot from the forum.

Bradley agreed, stating that though she was not very politically minded, the legislators seemed to respond to the questions well.

Hill shook hands with the audience and bent his arm in the signature Delta Gamma salute with a group of sisters for a photo. Hill said he appreciated the fresh perspective student lead forums bring and is always impressed with the University of Montevallo. 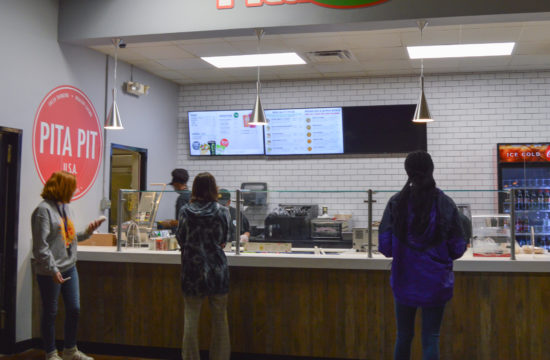 Effects COVID-19 had looking back…

Students have mixed opinions on…