Latest News
Home /How the caf is handling COVID-19

One of the most important parts of a college campus is its cafeteria. Not only is it where students who live on campus go to eat, but the cafeteria is also a good place for the social interaction which is a major part of the college experience.

A reopening task force was put together by the University’s President, Dr. John W. Stewart III.

According to a member of this task force, Director of Dining Services Jason Quarles, planning for the new system began back in April.

“As a member of the University’s COVID-19 task force, I’m in Zoom calls three times per week with others from campus constantly monitoring and making necessary adjustments to our operating plan, and we’ve been doing this all summer.”

Quarles stated, “Budgets are written so far in advance, our budget was submitted and locked down before COVID hit campus last spring.”

According to Quarles, masks for workers, hand sanitizer and cleaning supplies have all added costs that were not accounted for in the budget. The COVID-19 has also pushed back previous plans for a remodeling of the cafeteria that were supposed to happen over Christmas break.

Quarles also said that staff has been quite accepting of the new changes meant to help them stay safe. Though more staff were hired than a typical year, some have decided not to return yet.

“We had some staff members who felt it was in their best interest, because of age or underlying health issues to sit this semester out and I respect that, their jobs are safe for when they choose to return,” explained Quarles.

Student interests were represented by SGA president Thomas Dillard who acted as the SGA representative. “I was very involved and expressed student opinions regarding the policies, and I wanted what could keep students safe.”

Dillard also stated that he felt the task force did well in keeping the concerns of students in mind while working out the plans over the summer.

When asked about any feedback SGA received from students, Dillard stated: “We haven’t gotten very many concerns or recommendations to change over this first week of school.”

He said that the hybrid system, which limits the amount of students on campus, has helped with this.

“I genuinely believe the Falcon Forward plan that was created by the task force was an excellent move by the administration,” said Dillard. “The administration has given students the tools to be safe, so now it is our turn to follow the guidelines given to us so that we can protect ourselves and others.”

Theater major Sarah Clayton was another student who voiced confidence in the caf. “Personally I do feel safer just because there is no self-serve, so I feel more confident someone isn’t going to cough on the food.”

Clayton stated that she mostly gets take out. “Yeah its different since you know it’s up front because they don’t want you walking around…yeah it’s kinda weird not making my own plate though.”

According to Clayton, she considered it a mostly positive experience. “When I do eat in the caf, I pick places to social distance like the sun room or the nice room that used to not be open to students.”

Quarles stated that so far things have gone according to plan and thanked every student who has responsibly followed the rules. He added that this is a constantly changing system and that it could end up changing again in the near future. 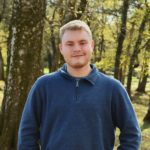