A thin, trebly guitar cycles through a chugging riff. A bass line ascends and descends on a loping scale. A monotone, cold voice rattles of an accusation of murder. Suddenly, a screeching metallic noise crashes in; the sound of shattering glass incites what’s in store for the next seven minutes.

Don’t believe me? Plunge straight into “I Heard Her Call My Name” off of their second album, “White Light/White Heat,” for further evidence.

Reed tightly snarls and battles through a muddy sea of electric guitar distortion while cat calling a girl in a sex-crazed fever dream. The rest of the band’s wailing back vocals are suddenly shoved to the side as Reed thrusts a punishing, screeching lead at the 53 second mark.

The band sloppily slaps back into the next verse like a rail car slamming back on iron tracks. Just as the whole song seems as though it’s about to teeter over the edge, Reed does the unthinkable and suddenly destroys the talents of Jimi Hendrix, George Harrison and Jimi Paige in one fell swoop. “I heard MY MIND SPLIT OPEN,” he roars.

At the 2:15 mark of that song, alternative rock, noise rock, indie rock, shoe-gaze—even dubstep and punk—were all conceived.

Lou Reed died on Oct. 26, a Sunday. While Reed was far from a holy, good natured man, he was important. 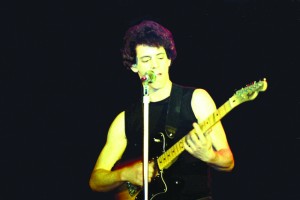 My exposure to Lou Reed has mostly been through the Velvet Underground’s four essential albums.
I used to listen to the stretch and yawn of “Sunday Morning” on my bus ride to school during the winter of my sophomore year. I used to blast “Run Run Run” and “There She Goes Again” while mowing my lawn.

Turn up “Sweet Jane” when you’re riding around in a car with your buddies and shout the chorus at the top of your lungs. It’s really easy to remember, I promise.

You want some ridiculously awesome slices of classic rock that you can fist pump to with your dad? Go “Head Held High” and “Rock and Roll.” Try your hardest to avoid bobbing your head during “What Goes On.”

When you’re feeling sinister and just want to throw your head into a brick wall, plug in to the 17 minute long “Sister Ray.” Bare your teeth and hold on tight until your knuckles go white and your ears start to bleed.

Don’t be fooled: Reed can easily break your heart as well. Let “Pale Blue Eyes” cradle you in its knowing, teary embrace when you’ve been kicked to the curb.

Just please listen to the songs I’ve mentioned. Better yet, go ahead and listen to the albums these songs come from. Any obit that you read about Lou Reed or video that encapsulates his life and importance is nothing if you leave out the music.

He was a once drug addicted, cranky, hipper-than-thou New Yorker who’d probably sooner give you the middle finger than a handshake, but he made awesome, influential, essential, amazing rock music—some of the best I’ve ever heard or will hear.

So, please. Get on Spotify. Look up stuff on YouTube. Buy a used copy of “Loaded” from an FYE or record store. If you end up hating it, fine—just as long as you’ve tried it out.

As I sit here and listen to “Endless Cycle” from “New York,” a photo of Reed with his wife, Lauria Anderson, descends from my Facebook newsfeed. It’s attached to a short obituary Anderson wrote about her late husband.

It reminds me that Lou—despite his murky songs and no-nonsense, often bleak view of the world around him—still loved. He was a person, a very human man who died from a very human disease.
I haven’t delved much into his large amount of solo material. As I stare at his discography on Wikipedia, it puts a smile on my face. Lou is gone, but he left a wealth of music that will carry on into eternity.

OP-ED: Why America First is…

Why most Netflix holiday specials…

How working in retail gave…

OP-ED: How the conservative movement…

The future of COVID-19 policies

No one should be denied…