Many mental health professionals recognize that there is a stigma surrounding mental health. Because of this, ending the stigma was a large part of the focus for TRIO-Student Support Services’ Mental Health Awareness week activities.

Once at Flowerhill, the group gathered around as TRIO McNair Scholar Madison Lawrence shared her own experiences struggling with mental health stigmas.

Lawrence explained that she originally lived on a small island in the Caribbean called St. Vincent and the Grenadines, which had very limited assistance for individuals in need of mental health services.

When she talked to a teacher about some of the obsessions she was struggling with relating to religion, the teacher informed her that she was possessed by a demon, something that Lawrence did not find helpful.

Coming to America changed everything for Lawrence. She was given her official diagnosis of OCD in 2019 after visiting a therapist. She now is able to take medicine to help her manage her OCD. Something that Lawrence wanted to make clear to those listening was that there was “nothing wrong with taking medicine for mental health.”

According to Lawrence, it is vital that mental health is treated the same way as physical health, and people should feel comfortable going to a therapist for mental health the same way they would for a physician when they are not feeling well.

She encouraged everyone to reach out if they were struggling in anyway, and reminded them that there were free resources on campus to help those who might be having difficulties relating to mental health.

Both Scott and Stallworth thanked Lawrence for sharing her story. After Lawrence was done, the group attempted to light some candles, with limited success due to strong winds.

After the lighting of the candles, the group recited a pledge to end the stigma surrounding mental health. 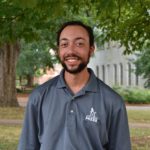