Plans discussed for the former golf course include a bird-watching trail and a designated nature reclamation area – an area designed to observe how nature reclaims areas altered by humans.

Dr. Susan Caplow, an associate professor of the environmental studies program, said, “as far as the process goes, we have a meeting in a couple of weeks with a bunch of the interested parties to really hammer out the details, as we don’t have a plan yet.”

Caplow discussed the idea for the nature reclamation area with university president Dr. John Stewart III and is currently referring to the space as the “rewilding project.” Her idea is to let nature reclaim the land and see what observational opportunities evolve around the process. Caplow said, “the idea that I had approached Dr. Stewart with was just letting part of the golf course rewild, in an organic, untampered way.”

The rewilding project will be an interdisciplinary space with many departments able to extract educational value from it. Caplow said, “biology classes could go observe,” and “there could be nature writing related to it. Dr. Forrester could do some philosophical ponderings about like nature, and, you know, what makes untouched nature.”

Caplow also expressed interest for educational opportunities beyond those enrolled in the university, saying, “we will certainly develop programs around the space. Those programs will be available for our K-12 field trips.” The environmental studies program conducts field trips to the university lake.

Caplow is hoping “that the rewilding area would be next to the lake,” since the lake is frequently visited and gives a natural atmosphere that the rewilding project is trying to capture. The space is “still in its idea stage,” and Caplow is open to multiple possibilities for the capacity the space could serve.

Caplow also discussed the possibility of a bird watching trail, saying, “it is possible that we could put some sort of like, you know, bird stand out there so people could birdwatch possibly.” She seemed optimistic, but said it is “probably part of what we’ll discuss, but I don’t know if there is a vision or if there’s a budget for any of those things.”

The rewilding project, the mountain biking trail and the bird watching trail will hopefully be completed in congruence with each other, with President Stewart “wanting to do all of them,” according to Caplow.

She also believes that the space would fit well with the current proposals working together, saying that “part of the goal is to leave it as natural as possible, so that the birds will want to come.” 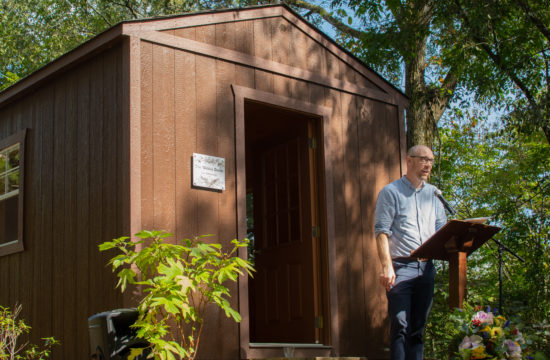