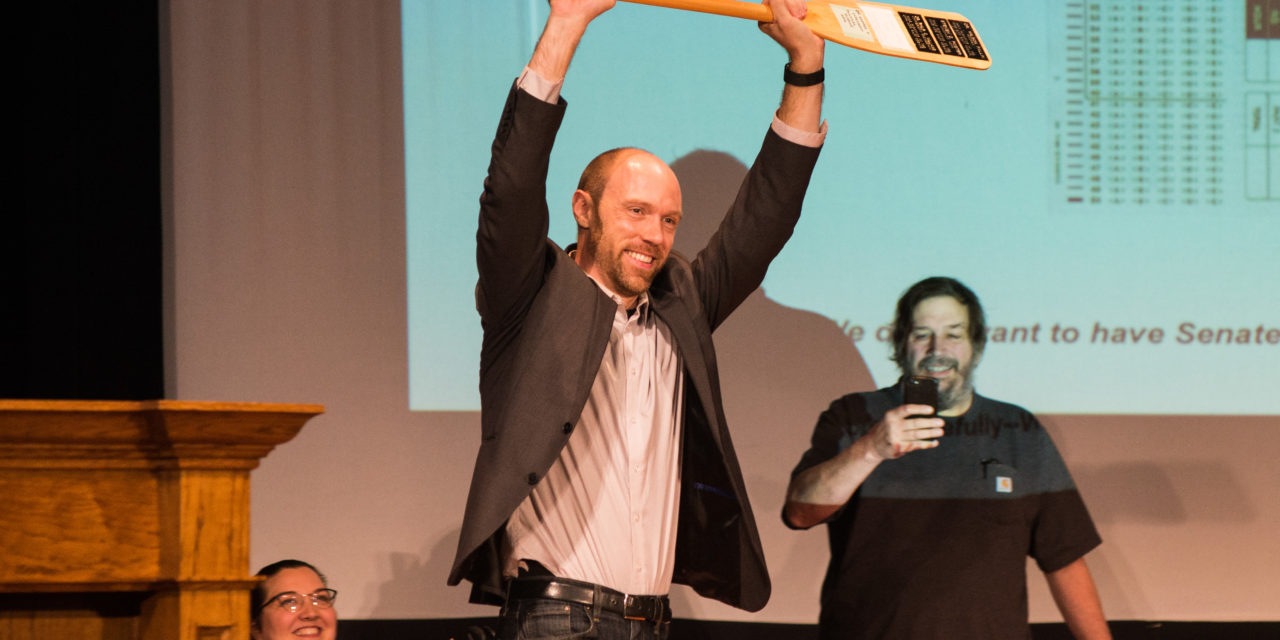 Beringer hoists the life raft ore above his head in celebration of his victory. Photo by Katie Compton

Imagine a nuclear catastrophe has occurred, and life as we know it has been changed for good. The Earth is flooded, and there seems to be only one life raft in sight. A singular seat remains, and you and everyone else seated in Palmer Auditorium have been tasked with deciding the fate of five desperate individuals, all of whom are vying for the coveted security only that raft can provide. Your decision will determine which four will be left to drown, and which one will live to see another day.

This is the situation students are left to ponder every year at the Life Raft Debate. Presented by the University of Montevallo’s Philosophy Club, this grim hypothetical pits professors against each other to determine whose discipline has earned them a spot. On Oct. 11, professors gathered to challenge each other once more, and students gathered to watch the display unfold.

“I’m excited. You know the life raft event is a lot of fun, and it’s really thrilling to win,” said Beringer of his accomplishment.

Going into the experience, Beringer was not most afraid of his competition but of the night’s emcee, Dr. Scott Varagona, associate professor of mathematics.

“He’s really formidable, so I will have to say that I am really glad that he wasn’t running for votes this year,” said Beringer.

However, Beringer’s victory was nothing short of a landslide, winning the favor of 290 out of approximately 375 “passengers.”

The first panelist was Turner, a former winner of the event. He discussed the skills gained from political science that would benefit the survivors. Using a theoretical approach, he quoted the likes of Hobbes and Rousseau, and argued that the purpose of his government on the life-raft would be, like Lasswell said, to determine, “who gets what, when and how.” After bewitching the raft-riders with his play for leadership with limited power, he stepped down to allow the next professor’s attempt to ride the waves with the raft-riders.

Another veteran of the debate, Gill used her knowledge of wardrobe creation and theatre maintenance in an attempt to gain the final seat. Wearing her wardrobe utility-belt and brandishing scissors, she demonstrated that she can face any challenge that comes her way.

Gill emphasized that, even though the survivors may be starving, they would be dressed comfortably from head to toe. She also promised in a soothing tone of voice that the wardrobe department would accept all as they were—even those who didn’t like deodorant.

Next came Bentley, representing teaching and curriculum, who attempted to show that the practice of education is crucial to civilization and essential for the new world. She concluded her argument by calling teachers the “first responders of society,” with teaching being Bentley’s superpower.

In defense of art, McMillian claimed that she had no interest in being “civilized”; however, she pointed out that she was a sharp dresser and that art and its history were the pathway to what society had become.

McMillian asked the audience to imagine what the world would be like if it weren’t for well-known artists like Leonardo Da Vinci or the brave artistic souls that opposed Nazism or the artists responding to the AIDS epidemic when the U.S. government neglected the voices of the suffering. She also stated that being an artist demonstrates faith in survival against the soaring odds.

Beringer demonstrated how English could save the lives of the fellow students, arguing that the biggest threat to humanity, often being a common theme in literature, is humanity itself. He remarked on how the characters in The Walking Dead clashed more with other survivors and among themselves than against the zombies.

He stated that the best solution toward this problem was empathy toward one another—to look beyond the differences and stick together no matter what comes at them.

“You are not alone,” stated Beringer in his closing argument. He emphasized that English, particularly writing in storytelling, encourages empathy and that, despite our differences, empathy through reading and writing could bring everyone together on the life raft. 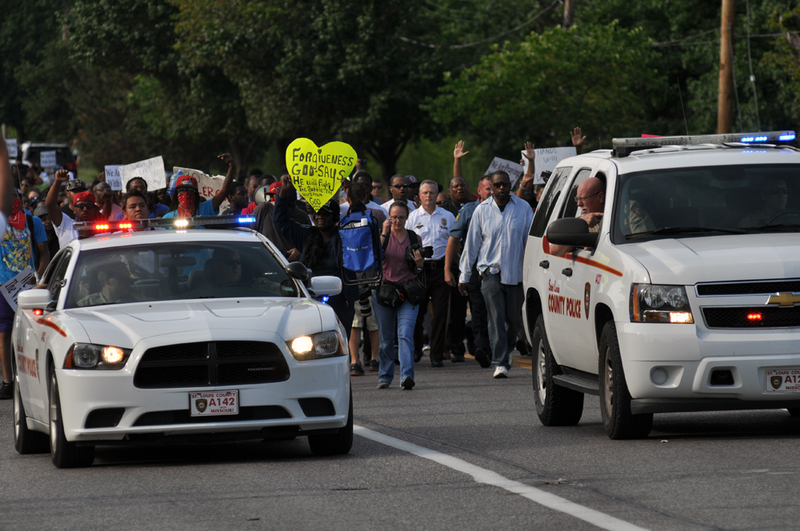 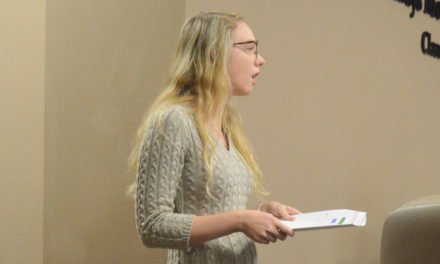